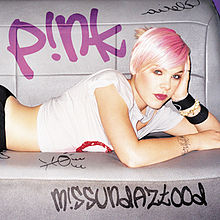 Missundaztood (styled as M!Ssundaztood) is the second studio album by American singer-songwriter Pink. The album was released worldwide in late 2001 to global commercial and critical success, critics welcoming the new pop-rock sound Pink presented on the record, after an urban-influenced debut.

The album’s singles were positively received by critics and fans. They all made chart debuts and became hits featured on Pink’s 2010 Greatest Hits… So Far!!! album. They include the global chart-topper “Get the Party Started” and hit singles “Don’t Let Me Get Me” and “Just Like a Pill”, all of which reached the Top 10 on the Billboard Hot 100. The album’s final single was “Family Portrait”, a vulnerable R&B anthem that Pink wrote about her parents’ separation. That song became a worldwide Top 20 hit, peaking at #20 on the Hot 100.