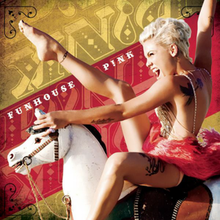 Funhouse is the fifth studio album by American singer-songwriter Pink, released by LaFace Records worldwide in October 24, 2008. The album debuted at number two on the Billboard 200 chart, selling 180,000 copies in its first week and reached number one on the charts in six countries including Australia, New Zealand, Netherlands and United Kingdom.

Singles from the album include the U.S. number-one single “So What”, “Sober”, “Please Don’t Leave Me”, “Funhouse”, “I Don’t Believe You”, and “Glitter in the Air”. Funhouse earned Pink three Grammy Award nominations and five MTV Video Music Award nominations. Funhouse was re-released in late 2009 to include a bonus DVD, and was accompanied by the release of Funhouse Tour: Live in Australia, a live album taped during Pink’s Australian leg of the Funhouse Tour.